Despite their extremely hectic schedules, ace cricketer Virat Kohli and actress Anushka Sharma always manage to find time to spend with each other. Though they have different professions, they seem to find a common ground in endorsements.

Much to the excitement of fans, they’ll be seen in another ad again. Last year, they acted in a clothing brand ad, just before their wedding in Italy.

Anushka took a break from her Sui Dhaaga promotions, and went to shoot for an ad with Virat, in Mumbai’s Film City.

The couple knows how to unwind well too. Virat, who is missing the ongoing Asia Cup 2018, shared two pictures with Anushka and friends at a restaurant. The caption read,

“Great lunch today at @nueva.world, food was outstanding and company couldn’t have been better. Great place for food lovers like us. #Favourite #Nueva PS- Don’t miss the chimichuri mushrooms!” 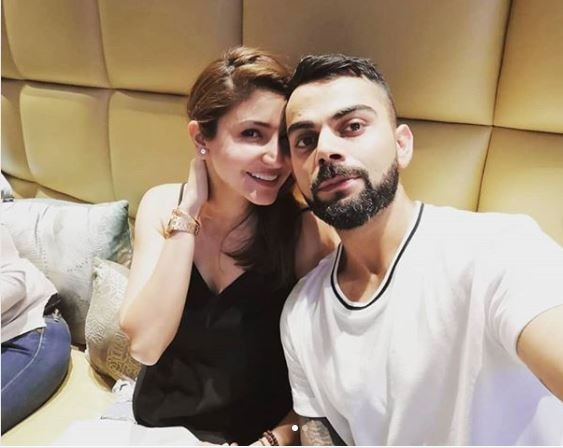 Virat and Anushka had a fairytale wedding in December 2017, after being in a relationship for over four years. Love blossomed between them while shooting for a commercial together in 2013, and last year, the couple had an intimate wedding in Italy, which was followed by grand receptions in Delhi and Mumbai.

On the work front, Anushka has had a busy year. She was seen in Pari, which was also her own production, Sanju and now will next be seen in Sui Dhaaga, and Zero.